On the Mount of Olives, there is a small chapel built as a memorial to the time when Jesus wept over Jerusalem (Luke 19:41-44). The chapel is called Dominus Flevit. It was built by the Italian architect Baluzzi. It is shaped like a teardrop to symbolize the tears Jesus shed over Jerusalem. On each corner of the chapel there is a vessel – four in total – shaped to represent the tradition of tear bottles.

I am a tour guide, and when I bring groups here, I always take time to talk about God as a compassionate God who doesn’t look down at our misery from above, but participates in it through Jesus. He bore our sufferings in his fully-human, fully-divine body on the cross, and knows our sorrows intimately.

In Luke 7 we meet a desperate, sinful woman who throws herself at the feet of Jesus right in the middle of a feast given for him by Simon the Pharisee. The room is full of guests, and when this women enters the room, she does the unthinkable as she cried so much she wet the feet of Jesus with her tears, wiping them dry with her unbound hair.

Everyone in the room is waiting for Jesus to respond. They all know what he is supposed to do. But Jesus does the unthinkable.

Why it is unthinkable?

To answer this question we need to know a little bit of first-century Jewish tradition. In the Middle East at that time, several different traditions existed around the saving of tears. If someone died, tears of all those present were collected and placed in a bottle. The bottle represented the sorrow of the loss the family experienced.  Sometimes the bottle was even buried with the deceased as a sign of the status of that person. 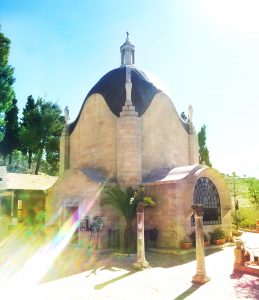 Another tradition of the era was to collect tears of lament and loss. There were special vessels used by their owners to catch and preserve their own tears during times of grief or extreme pressure. When life filled with pain and confusion, people would collect their tears as a reminder for both self and God of the hardship. This tradition is referenced in Scripture. David wrote Psalm 56 during a time when he was facing extreme pressure from the Philistines, and was most likely not able to college not unknown in the bible and David writes a psalm when he is under extreme pressure and most likely was not able to collect any tears in the midst of the conflict. David asks God if He himself isn’t collecting David’s tears in His bottle: “You have kept count of my tossings; put my tears in your bottle. Are they not in your book?” (Psalm 56:8)

David is saying here he trusts God to remember and deliver him from hardship, lament, suffering and loss. The language of tears in a bottle might even be a metaphor for God’s Book of Remembrance which is being “written before Him for them that feared the Lord, and that thought upon His name” (Malachi 3:16). David concludes Psalm 56 by praising God: “For you have delivered my soul from dea th, yes, my feet from falling, that I may walk before God in the light of life.” (v. 13)

This background gives us a deeper understanding of why the sinful woman weeping prostrate on the floor before Jesus in the Pharisees house was such a radical encounter. Many scholars believe that the tears with which she is washing the feet of Jesus come from her own bottle of stored-up tears. Other scholars suggest the bottle of tears came from a burial site belonging to someone dear to her.

In any case, this woman is proclaiming her belief that Jesus is not just another religious leader. She is instead saying He is worthy of all her misery, her loss, and her hardships – everything she’d stored in her tear bottle to remind her remind herself and God of what had happened to her. She chooses to pour it all out on Jesus. In doing so, she is elevating Jesus above all others present in the room. If she is not proclaiming him as God, she is elevating him as a representative of God. The account in Scripture ends with Jesus forgiving her sins, confirming her act was wise and right. He indeed is able to not only remember her particular sin and sorrow, but to remove them from her. His forgiveness proclaimed that God indeed does know every one of our wanderings and sorrows.

Dominus Flevit is not just a historic chapel built to commemorate the tears of Jesus over Jerusalem. It also reminds us that God collects our tears and remembers us here and now. God is a God who remembers and redeems to this very day.