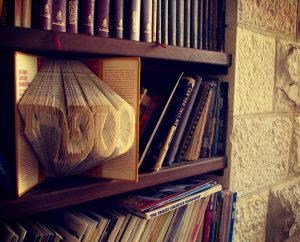 At the Caspari Center, we encourage people to come and study in the land of the Bible. We love to help facilitate such endeavors through our library, contacts, and proficient instruction.

This fall, Pastor Jan Bygstad, from cold and rainy Bergen on the west coast of Norway, did just that. He took a pastoral study leave when the possibility arose to dive into a subject that had been on his mind for decades: Jewish believers in Jesus and their theology. Jan’s interest in the Jewish people was sparked when, as a youth, he read Andre Schwarz Bart’s novel The Last of the Just, which deals with the Holocaust and who the Jewish Messiah is, or should be. This grew into a natural interest in and care for Jewish believers in Jesus. The focus of Jan’s study time was to gain a deeper understanding of the place of the Torah in the Messianic movement(s). Jan recalls that the opportunity to be away from his demanding congregational service was a great benefit that enabled him to read without distraction, especially in the Caspari library.

Some of the things that surprised Jan most in the Messianic movement were the lack of understanding of the distinction between law and gospel; the strong influence of various types of Reformed theology that he encountered during his interactions with different Messianic leaders or through their books; and a willingness to accept rabbinic tradition to a certain extent. This deeper understanding of the problems and theological challenges confronting the movement enhances and advances the capability to discern and ponder a biblical approach to what we are facing today as believers.

One of the things that has been important to Jan in his work as a minister is that the First Testament is not to be considered merely a preface to the New Testament, but is itself Holy Scripture that Jesus and the NT writers reveal. Luther was quite clear that the Tanakh is Holy Scripture proper, while the gospel/NT is an oral and preached word. To a large degree this idea was lost during the Enlightenment. This is also one of the biggest challenges for the historical churches: to take the Tanakh seriously as a sacred text on its own merits, as Jesus teaches us.  A great challenge of the Messianic movement seems to lie in anthropology—that is, to realize the depth of the Fall, and with this the pedagogical task of God’s law. Without this, the preaching of the law becomes moralistic.

Encountering Messianic theology—and Messianic believers—enhances the understanding of the background of the NT. As Jews, the Jewish believers often have the ability to reveal connections and insights that we as non-Jews easily overlook.  This also is part of Jan’s interest in the movement: It can give the church important insights into the biblical text. It is also important to be aware of the fact that the apostle Paul gives Jesus the status that the Torah has in rabbinic Judaism: Jesus—not Torah—is “the way, the truth and the life.” He also is the pre-existing intermediary between creation and the Creator.

When asked if he would call the NT “Halakhah for Christians,” Jan said, “You certainly find a kind of Halakhah in the NT, but this is a Halakhah that is rooted in the death and resurrection of Jesus, as Paul teaches in Romans 6.”

In closing, Jan said, “The meetings with Messianic leaders were so intriguing that I would have loved to continue my conversations with those whom I met during my time in Jerusalem. And I absolutely recommend that anyone who has an interest in the movement and their theology come and spend some time at the Caspari Center.”