Some years ago, when video tapes were still in use, I watched a message given at a conference by an American minister. Unassuming, simple, and dead serious about his work, the way he related to his own personal story impressed me deeply.

The man’s parents had had a dysfunctional marriage. As a family, they had moved around a lot and eventually his parents divorced. The father contracted tuberculosis and deserted the family; the mother began to drink. When the boy was twelve, she abandoned him on a street corner. Three days later, still waiting at the street corner for his mother to return, the boy was discovered by a neighbor, who took him in and introduced him to the Lord. Upon graduating Bible College, the young man returned to his home church in Florida and pioneered a bus ministry for thousands of underprivileged children in the projects.

This man was invited to replicate the program in Iowa, and then moved on to do the same in one of the roughest areas of Brooklyn, New York. Over time, his ministry grew and now reaches over 100,000 children on a weekly basis. He has become a well-known, respected and sought-after speaker. However, none of that ‘glamor’ seems to have gone to his head. He continues to live in Brooklyn, to drive a ‘Bible bus’ filled with kids once a week, and to eat with homeless people. Furthermore, every Christmas he goes back to the corner where his mother left him. I will never forget what he said on that tape: “Every year I come to that corner, sit down right where I sat that day, and spend an hour or two there, just sitting.” Why? In his own words, “Because it really is easy to forget where you came from.”

The man’s name is Pastor Bill Wilson. Nothing I’ve heard or read about him suggests a Jewish background, but his self-made Christmas custom speaks so strongly to me as a Jew, especially at Passover.

Historical memory plays a role in every Jewish holiday, but Passover, more than any other holiday, is the holiday of remembrance. We are to remember God’s mighty deliverance of our ancestors. And the first thing to remember is where we came from: “Remember that you were once slaves in the land of Egypt,” the Torah tells us, over and over again. 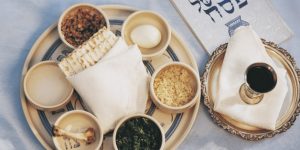 In Judaism, remembering means not only committing certain facts to memory, but also reliving the past, experiencing it again in the here and now. The Passover Hagaddah goes as far as to say that “in each generation, every person is obligated to see himself or herself as though he or she personally came forth from Egypt.” That is why at the Passover Seder we dip parsley into salty water before eating it – to taste those Egypt tears in our mouths, today. We also eat bitter herbs, as the Torah commands us, in order to sense the bitterness that reminds of that slavery. And we say that we, too, were slaves, and that we, too, were delivered from Egypt by the LORD our God.

Why is it so important to remember where we came from?

Firstly, because, as the Hagaddah says, had God not delivered us, we would still be slaves. We could not save ourselves. It took God’s miraculous power to set us free and to bring us to the Promised Land. And secondly, because we are prone to forget our slavery in Egypt. And if we do forget, we will take our present blessings for granted. In other words, we’ll become ungrateful to God, which is the first step to falling away from him, as the entire Bible demonstrates clearly.

As Messianic Jews, at Passover, we also remember the Exodus accomplished by the Messiah in Jerusalem at this Passover season, around 33 A.D. (the Greek of Luke 9:31 actually has the word ‘exodos’!). There and then He delivered me – a slave of sin – and brought me into the freedom of the New Covenant. He died my death, and rose again on my behalf, which is why, quite in line with Hagaddah-style thinking, the Apostle Paul tells me to see myself as “dead to sin but alive to God in Christ Jesus” (Rom. 6:11). Talk about the Jewish background of the Gospel!

Although Egypt is pretty close and is relatively safe for us Israelis to visit, I haven’t been there yet. Perhaps one day I will travel there and see the ancient structures, some of which might have been built by my ancestors, a few thousand years ago. But more importantly, I always want to remember the bitterness and emptiness of the life that I, once a slave, lived a number of years ago – before I came to know Yeshua.