Nearly twenty years ago, the Caspari Center began an empirical endeavor to gather specific information regarding Messianic believers in Israel. Where did they gather? What did they believe? How big were their congregations? How were these congregations structured? How many Jewish believers were there in the Land? The Caspari Center survey entitled Facts & Myths About the Messianic Congregations in Israel was the first book of its kind to be published in Israel.

Since that time, several theological books about the Messianic movement and about various Jewish believers have been released, but no new data has been published regarding the number of believers or the structure and theology of the various congregations. We at the Caspari Center believe that it is time to tackle these questions once again.

Twenty years ago, Facts & Myths received a great deal of attention, both positive and negative. Controversy arose primarily from the fact that some people felt exposed by the publication of the book, as they would have preferred to have remained under the radar. There were other people, however, who found the detailed research helpful, and expressed gratitude for it.

The world is a different place today from what it was twenty years ago. Many congregations now have their own websites. Information about the Messianic body is much more public and widespread. There is also a new openness among the body of believers in Israel, a natural consequence of demographic growth. We believe the number of congregations has increased during last two decades, but without doing formal research, we cannot know to what extent, nor can we provide the kind of data that will assist the body in continuing its work in disciple-making. 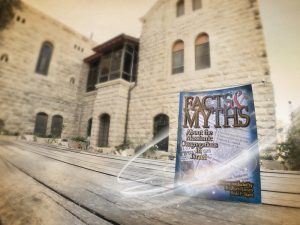 We approach this new edition with greater awareness. Conscious of the previous backlash, we wish to be considerate of local sensitivities before embarking upon this project. We reached out to a number of local congregations, Messianic organizations, and local leaders, and secured their support. In addition to compiling all the congregations’ information, we will also survey as many local Jewish believers as possible. We hope to provide solid demographic data about the nature of the body of believers in Israel. We will also gather anecdotal data from local congregational leaders about the structure, history, and key theological beliefs of their gatherings.

We plan to gather the data over the next six months, after which we will prepare the data for publication. Our hope is to be able to publish those findings near the twenty-year anniversary of the release of the first Facts & Myths. We aim to present an accurate picture about believers in the Holy Land, and to provide accurate empirical data so we don’t succumb to wishful thinking or pessimistic views of what is going on in this part of the world. This new study will allow us to reflect on what has worked in the last twenty years, and give us information many can use to prayerfully discern how to move forward in serving our Messiah.

We would appreciate your prayers and financial assistance for this important project, as we seek to dispel myths and present facts about the body of believers in Israel.