Last year marked the 500th anniversary of the Reformation. It is counted from the event when 95 thesis were nailed at the church door in Wittenberg, Germany, by one Catholic priest, doctor of theology and an Augustinian monk named Martinus Lutherus. Some other date could have been chosen as well, as the Reformation was a long process. But since we love simplifications, let’s leave it at that. 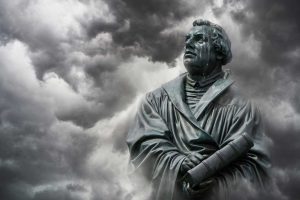 A lot has been written in the forums relating to Messianic Judaism about the complex relationship between Luther and the Jewish people, especially concerning the last few years of the reformer’s life. Besides this it has been noted a few times how this same person started the Reformation and again revealed the meaning of grace. This usually serves as an introduction to the actual topic mentioned earlier – the failures of Luther.

In a discussion I had with one Messianic Jewish believer he asked what I thought about Luther. After I had recalled the fundamentals of Lutheran Reformation he remained silent for a while. He admitted he hadn’t thought about that and yes, we all are in debt to him. I was positively surprised of his sincerity and after this we had a good discussion which also included the negative side of Luther.

So now I’ll try to put some things in to context.

Lutherans don’t follow Luther. Lutherans believe that certain things are Biblical and others are not. The essentials of these can be found from the Book of Concord, the Lutheran confession. From there one finds three old Creeds (Apostles’, Nicene, Athanasian) and seven books written during the period of Reformation. Of these seven only three are written by Martin Luther. Some Lutheran churches affirm only two out of these seven: Augsburg Confession (by Philip Melanchthon) and Small Catechism (by Martin Luther). Luther may have started it and he definitely was a central figure of Reformation, but he wasn’t alone even in the beginning.

Lutherans may disagree with Luther. It’s not a problem. For example Lutheran churches have renounced Luther’s anti-Judaism several times after the Second World War. It happened only after the war because before that there were only few who even knew the existence of certain writings that were collecting dust somewhere, and were then dug up by Nazis and few other anti-Semites, and used to back up an ideology that was alien to Luther. Danish Lutherans who saved the Jews in Denmark or Finnish Lutherans who never accepted the existence of a “Jewish question” while fighting three years alongside with Germany (to name a few examples) are rarely remembered, when someone wants to connect Luther with the Nazis.

What started the reformation was the claim that a believer is justified by faith alone without the works of law. That is to say, in Lutheran understanding no one has any merit to present to God in order to earn salvation. Salvation is given by grace of God alone, through faith – that is also a gift of God – in Jesus. So at least in theory Lutherans are extremely centered in Jesus. It is only because of him that we are forgiven and saved. Nothing can be added to that without endangering one’s salvation. Believer’s life, or the process of sanctification, is something that will and should always follow the salvation. But these are kept separate. Despite the success or failure in life as a believer, salvation remains dependable on Jesus alone. No deed can be added either as a way to achieve salvation or as a way to keep it. It’s all about Jesus.

The reason for that is found in the Lutheran reading of the Holy Bible which is seen as the sole authority in faith and life. Teachers and preachers can be respected and honored. Same goes with history and tradition. But it applies only as far as they are in line with the Scriptures. For example worship may happen in one place with high liturgy, robes and written prayers. In other place it may be without any of these – and anything in between. In itself it is not seen as being for or against the Bible. Whatever helps to keep the essentials is worth keeping and vice versa.

In the end Lutherans remain an oddball in between the old and new churches. Positively taken, Lutherans can be flexible to both directions. Some of us understand tradition and Fathers, and usually we follow the early liturgy. On the other hand some of us use all the possible instruments in worship and may even be a bit charismatic. Negatively taken, for the old churches we sometimes are remembered as those who broke the unity of the Church and are too disrespectful towards the Tradition. The newer churches sometimes claim that we didn’t take the Reformation far enough, and now we smell too old and formal, not letting the Spirit move freely. Besides two streams inside Lutheranism – which some would define as “confessional” and “evangelical” – also the liberal movement has affected to some of the western Lutheran churches (although it’s worth to note that the biggest Lutheran churches currently  are in Africa). At times it feels as Clint Eastwood put it: Everybody blames the Lutherans.