During the Caspari Center’s Discovering Jesus in His Jewish Context course which took place recently, 13 participants had a unique opportunity to discover the Land of Jesus. Among the course participants there were some Norwegians, some locals and, like me, many Finns.

The stones all around reminded us of what once was: whether the great palace fortress of Herodion, the intriguing Magdala Stone at the Magdala Village Synagogue excavations, or the Temple Mount’s fallen stones. It’s possible that Jesus himself, while tempted by Satan (Luke 4), had stood next to one of these such stones at the top of the Second Temple.

Gazing at the magnificent Qumran caves filled me with excitement. In the past, these caves could only be viewed in the imagery of school books, but now they were before us! Thanks to the faithfulness of the sect of the Essenes, who hid their texts in the Qumran caves, we have proof that God’s Word really hasn’t changed over the centuries!

All these archaeological sites, excavations, and ancient cultural phenomena shed light on what we call “Jesus’ Jewish context”. In addition to these excursions, we had the opportunity to meet some inspiring “living stones”, some of the special people who live in the Land. 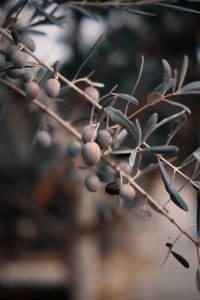 re of our 10-day-course was lectures on Messianic Judaism. The worldwide community of believers, Jews and Gentiles together, makes up the Body of Christ. We share the same nourishing sap of the olive tree (Romans 11). Some of the branches are native, while others have been grafted in. Paul made an interesting request of us Gentiles: “[…] do not consider yourself to be superior to those other branches” (Romans 11:18). We must never forget that it is only through the Jewish Messiah that the Gentile Christians are connected to the original olive tree.

Israel being “chosen” instead of the nations may cause jealousy in those who are not a part of Israel. Alternatively, being part of Israel can provoke pride among the chosen. Hatred and jealousy have resulted in violence and persecution, as we have seen throughout Church history.  And yet, the bible also states that the Jewish people will be provoked to jealousy because of Christians’ relationships with God through the Jewish Messiah (Deuteronomy 32:21, Romans 11:11). God used one chosen nation to bring all the peoples of the world together, and he did this by giving His one and only Son.

Paul also reminds us in Romans 10: “Christ is the culmination of the law so that there may be righteousness for everyone who believes”. In my opinion, Paul is reminding the Israelites not to build on the Law of Moses as if there were a way to salvation other than Christ. He is the fulfillment of the entire Law and is the only one who has followed the whole of God’s Law without any transgression.  A person becomes justified through faith – and through faith in Yeshua alone.

With equality of all the children of God, the calling of Israel hasn’t vanished. Jews still carry on with the covenantal responsibility, for God doesn’t revoke His covenants. (Of course, this is a matter of theological discussion and interpretation.) A new awareness brought on by the course has prompted me to search deeper into contextual and covenant theology.

The Power of Resurrection 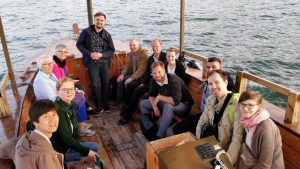 The author and his wife are pictured at the bottom right-hand corner.

English lay theologian G. K. Chesterton once stated: “Christendom has had a series of revolutions and in each one of them Christianity has died. Christianity has died many times and risen again; for it had a God who knew the way out of the grave” (The Everlasting Man). You can easily substitute the Nation of Israel for Christianity here. There have been many deaths in the history of Israel, and many resurrections, as well. Over the centuries, both Jews and Christians have shared this common experience of persecution.

This quotation brings to my mind the Holy Communion Liturgy at the Garden Tomb on our last afternoon together. Echoing Pastor David, we all shouted aloud: “Christ is risen!” Let us be reminded of Paul’s words: “And if Christ has not been raised, our preaching is useless and so is your faith. […]  But Christ has indeed been raised from the dead, the firstfruits of those who have fallen asleep” (1. Cor. 15:14, 20).

God has prepared a magnificent salvation plan for all humankind. The Heavenly Kingdom is already here, while at the same time, it isn’t yet. And so we look forward to one day seeing the Son of Man on the Mount of Olives, having returned to redeem this corrupt world.