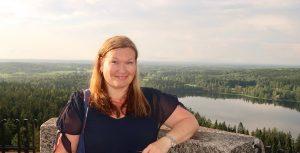 “You are somehow very loud nowadays!” laughed my dear high school friend when we reunited. After 16 years in Israel, I had changed a lot in her eyes. I hadn’t realized all the changes in myself, yet. Finland and Israel both have blue and white flags, but that’s where the similarities end. Finnish people do not honk their car horns or push in the queue, and they do not ask anybody’s weight or salary. But Israelis do. In addition to these cultural and behavioral differences, graphics and media in Israel also have their distinct languages. And when I, a shy graphic designer from Finland, stepped into the Caspari Center office in 2000, I didn’t know it would change everything

From the very beginning, it was thrilling for me to create flyers, book covers and other assorted publications in Hebrew, Russian, English, Amharic, and even Arabic, for Caspari Center. I was their first long-term graphic designer, and I was given a lot of freedom. “Do whatever you want, just make the vision alive!” were my instructions. I enjoyed the challenge. Not only were the letters very different, but so was the spiritual culture behind the language. It was interesting and challenging to try to catch the vision of the different project coordinators, who were themselves from different cultures. Many biblical themes were quite difficult to illustrate, at first. How would you depict replacement theology, legalism or dispensationalism in one photo? Though a project’s vision can be challenging to catch, it’s necessary that the vision is made clear. I discovered the bigger picture of the connection between vision and graphics: that a clear vision connects the older believers with the next generation, and unites believers from the different backgrounds. Vision gathers people to the things God is doing, not only what people in the ministry are doing. Professionally, my time at Caspari Center was a great adventure and taught me about biblical vision in general. But that was not the main inspiration to stay in Israel for 16 years.

Adventures continued after work, too. I remember going to the Old City of Jerusalem for the first time and being completely taken advantage of in a bazaar. I don’t remember how many shekels I lost back then, but I remember what our young Israeli receptionist said. She emphasized: “You have to be ‘chutzpanit’ in order to survive here.”  (“Chutzpah” is the quality of audacity or boldness, for good and for bad.)  So on top of my Hebrew studies, I studied chutzpah by observing others. I actually began to enjoy those episodes in the streets, shops, supermarkets, banks, offices, etc… Quite often they led to good spiritual conversations, as well. And I never felt embarrassed when shop clerk asked me about my religion, marital status, weight or salary.  What freedom! But that also was not the main inspiration to stay in Israel for 16 years.

Caspari Center was not only a healthy and inspiring organization to serve with, but also acted as a window through which I could see what was happening in Israel. From that cultural window, I was able to observe many changes, especially in the Messianic movement. I witnessed different waves of Aliyah, both big and small, I watched as the number of Messianic believers grew, I saw big changes in congregations, and also in Jewish-Christian relations. For example, in the early years, it was impossible to stand with my camera and film the annual Shavuot gathering of Messianic believers from all over Israel. People were very afraid and would hide their faces when they saw my camera. Persecution still exists, but 16 years later at that very same annual event, young people – that “next generation” we had prayed for – actually asked me to take photos of them!  New winds are blowing a fresh kind of boldness among the believers, and that is not just chutzpah; it is kingdom boldness. But neither was that the main inspiration to stay in Israel for 16 years.

I weathered political winds, and bigger storms. In those 16 years, I bought a gas mask, ran into a bomb shelter a few of times and witnessed terror attacks. The bus line I routinely used was bombed, people from my neighborhood were stabbed, and I saw too much blood, all of which was a very big deal for a Finn. Through those things, however, I learned to respect the nation of Israel, and its right to exist, on a new level. I was never afraid, and my chutzpah grew.  Now here in Finland I dare to say how things really are in Israel, even though the majority of people believes the lies about Israel propagated by the international mainstream media. Western media is no longer reliable, but still the nations seem to believe it without seeking out the real facts. Even in Finland.

But, thanks to chutzpah, many times people have really listened to me when I said, “Let me speak!” The world sleeps and loud voices are sometimes needed. Anti-Semitism is growing, and people need to see things from the Israeli perspective too.  Our kingdom chutzpah needs to be loud, not for ourselves, but for the truth of the God and the people of Israel.

Heidi Tohmola was the Caspari Center graphic designer from 2000-2016. She returned to Finland in 2016.