For a long time now, the Norwegian Church Ministry to Israel (NCMI; the organization which established the Caspari Center) had been wanting to pioneer a Bible school in Israel. At the same time, a desire had also been growing in the hearts of some young Norwegians working with the Youth With A Mission (YWAM) branch in Rogaland, Norway. And so a new partnership came into being. The “Experience Israel – Back to the Roots” bible school for young adults was pioneered, with the YWAM team contributing their experience teaching young people, and the Caspari Center/NCMI staff providing their theological expertise. 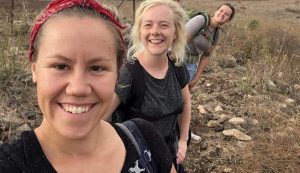 The goals of the bible school are to provide the students with sound biblical teaching, first-hand experience of Israel and an understanding of Israel’s role in God’s plan. They also aim to instill in these young people a passion to give the gospel back to the people from whom it first arrived. Erlend and Sofie, the Norwegian couple who led the two month-long school, believe “Experience Israel” provides students with an experience that is impossible to obtain only through reading the bible or watching the news. “The students get to live in the land where it all happened… where it is still happening… and it will change their perspective!” Erlend enthused. What a joy it was to host and join these eight participants from Norway, Estonia, and the US; all called here by God in different ways, all here for different reasons.

Some participants had always wanted to come and saw this opportunity as a gift. Andreas, a father from Norway with a heart for evangelism and the Jewish people, used his paternity leave to participate in the course. Ingebjørg, a young woman from Norway, said, “It felt like an invitation from Jesus, my friend, to come and explore where he grew up and lived his life.” Another participant, Andra from the United States, was asked whether she was interested in joining the course. Andra initially thought, “No that isn’t really something for me, I don’t have a heart for the people of Israel.” But then God spoke to her, saying, “That’s exactly why I want you to go. I want to give you a heart for my people.” She decided to go, right then and there, out of obedience to God. 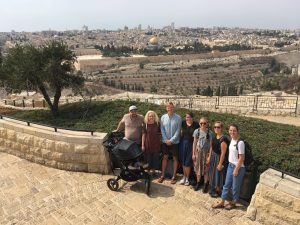 On a daily basis, we had two to three lectures a day on varied topics such as Messianic Judaism, Church history, the Messiah in the Tanach, Biblical covenants, and the Jewish feasts. We also had one to two excursions per week visiting many archaeological and historical sites. Though we all participated in the same activities every day, God spoke to us all in different ways.
Andra was blessed in her obedience and has learned so much about the Jewish roots of her Christian faith during her time here. She reflected, “I’ve learned about why the Jews and Israel play such an important role in God’s plan.” Another young Norwegian, Karen, was surprised to realize how much she was putting Jesus into her own culture even though she knew he was Jewish. She enjoyed learning about the culture that surrounds the bible; it revealed formerly hidden things to her and allowed her to go deeper into her faith. Andreas was interested to learn about the Messianic movement and how it came to be. He also said, “It was great to visit different biblical sites to see that there is archaeological evidence for everything in the bible, it really strengthened my faith. This is the real stuff!” Each student left Jerusalem equipped with knowledge that could take a lifetime to process through. And God has called each one to use that knowledge in a different way.

Andra, who originally wasn’t going to come, is now excited to take the message and life lessons she has learned here back to her friends and family. Andreas has been given new perspectives to take into conversations with people in his home church. He feels equipped to tell people that Two Covenant and Replacement Theology is not the way for the church, and that Israel is still God’s chosen people.

Ingebjørg realized we’re all supported by the same root and that God called Israel to be a light to the nations, which includes us. She believes everyone who knows that truth has their part to play until Jesus comes back. She has decided whether she comes back here or lives her life anywhere else in the world her prayer will always be to live connected to Him and the promises that are yet to come true.

What a wonderful privilege, as young people, to learn about the Jewish roots of our faith and to grow a heart for God’s chosen people, Israel. The course broadened our perspectives and deepened and enriched our faith in Yeshua. I’d say this pilot project was a great success and that everyone involved is excited to continue the partnership.