(Part I can be viewed here) 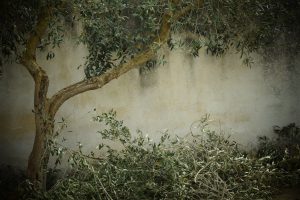 One area that reflects our connection to the Jewish roots is our relationship with Israel. Can there be room in our theology for the Jewish people now and in the future, or should they be relegated to the past? In his book, Messianic Judaism, Messianic Jewish theologian David H. Stern stated that the biggest schism to take place in Church history was the breach between the Church and the Jewish people during the first centuries. That breach happened for various reasons. The Church played her part, as did the Synagogue, and blaming “the other” doesn’t lead anywhere. It is much more fruitful to ask: What did we Christians lose? Is there something we might regain, or rethink, after all these centuries?

Biblical Feasts – a Shadow of the Eternal

For some believers, a practical way of honoring Jewish roots is celebrating biblical feasts. The feasts can be a veritable treasure trove in many ways, increasing our understanding about God’s salvation plan as recorded in the bible. However, the bible gives Gentiles full freedom concerning the observation of such festivals, as well as the Sabbath. Let no man therefore judge you in meat, or in drink, or in respect of a feast day or a new moon or a Sabbath day: which are a shadow of the things to come; but the body is Christ’s. (Col. 2:16-17 ASV) The festivals are a shadow of eternal things and things to come; as such, they are good. They point to a much greater reality. We shouldn’t understand Paul’s comment as a negative or diminishing statement about celebrating Jewish feasts, but as a reminder to keep our ultimate focus on Jesus. Studying the feasts’ rich biblical content is beneficial for every Christian; and whoever so desires is also at liberty to experience them together with Jewish believers.

Staying Grafted in the Olive Tree

Paul wrote much about the relationship between Jews and Gentiles in Romans 9-11, painting the image of the cultivated olive tree. In Messianic Judaism, David H. Stern explained the symbolism of this picture in a way that is different from the traditional Christian understanding: The roots of the tree are the patriarchs Abraham, Isaac and Jacob. The trunk is the people of Israel, with Jesus the Messiah – the most important member of the nation – at the core. The original branches are the Jews, and the Gentiles, the wild olive branches, are grafted into the tree. Lying on the ground near the tree are some original branches, cut off due to their unbelief. Instead of being church-centered, this picture is actually very Israel-centered, and that has very often been a difficult idea for the Church to grasp. Many churches live, function, teach, evangelize and do missions without Israel. They think of Israel as having performed and fulfilled her main role in the Old Testament, but that after Jesus’ resurrection, she became obsolete. Contrary to this mindset, appreciating your Jewish roots could mean being aware of the whole we are always a part of, and remembering the common roots, which nourish us all. We Christians are called to accept and value the eternal election of the nation of Israel. You do not support the root, but the root supports you (Rom. 11:18). A branch, or a tree, cut from its roots doesn’t live long.

I would like to propose a Christian world view where Jews also figure into the picture. The election of the Jews as a chosen people did not vanish after Jesus came, nor has it somehow been reconstructed into the calling of Christians. (Although it is obvious that the Jewish people cannot really fulfill their calling until they receive Messiah.) God’s faithful character demands that he honor his promise to realize the destiny of the Jewish people. The Jews haven’t only been instrumental in bringing Jesus into the world; they are also the first recipients of his love and promises. The scriptures have many prophesies about the return of the Jewish people to their homeland and the great end-time outpouring of the Holy Spirit over the nation. God will keep the Abrahamic covenant with its promises to Israel, as well as to the Church. As Christians, we have to embrace today’s Jews, not just at the level of friendly dialogue between two different religions, but rather as central players in God’s future plans. 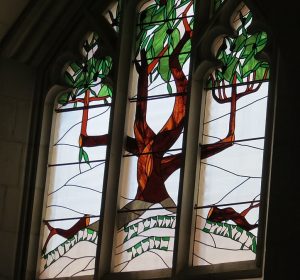 A stained glass window in Christ Church Jerusalem depicting The Olive Tree. The branches on the right side show a menorah and the branches on the left show a cross. The text in Hebrew quotes Romans 11:32: “For God has consigned all to disobedience, that he may have mercy on all.”

I believe that as we draw nearer to the end, we will see God bridging the gap between the Church and the Synagogue. In their book Israel, the Church and the Last Days, Messianic teachers Keith (Asher) Intrater and Dan Juster describe the development of end-time events: False Christianity will fall prey to rising anti-Semitism, but the true believers will become increasingly aware of the Jewish roots of the faith. Right now, God is already restoring the Jewish wing of the Body of Messiah. More and more Jews are coming to know their Messiah.

The Messianic movement will be the crucial link between the Church and Israel. However, both Messianic Jews and Gentile Christians have their role to play in this healing process. God is calling Jews and Gentiles to live out the spiritual truth about the One New Man (Eph. 2:11-22). Many churches are still quite oblivious to the events which are about to take place. Some of them still struggle with the basic idea of Messianic Judaism and Jewish believers who refuse to “convert to Christianity”. Concerning some aspects of Christian theology, reassessment is needed in order to make room for following Jesus in a Jewish way within the Body.

According to Intrater, there is a special, powerful dynamic in the cooperation between Jews and Gentiles in the New Covenant congregation. Many Jews receive salvation and revelation for their spiritual lives through Gentiles. On the other hand, as we near the end times, Jewish believers are bringing a particular depth of understanding into the Body of Christ, with regards to the end-time prophesies and the restoration of the Jewishness of the Church. Keith Intrater states that if we all want to walk in the fullness of God’s plans for us, we must humble ourselves and receive from one other.

The Jewish roots of the faith are not a matter of any individual’s salvation, though they are a matter of the Church’s future. This world is full of pain of rejection and envy. It creeps into our relationships, even in the body of Yeshua. Throughout Church history, the identity of Jewish believers has continuously been invalidated. However, according to Paul, Jews are called to remain Jews, even when following Jesus (1 Cor. 7: 17-20). At the same time, Gentiles are valued as Gentiles, loved and chosen by God. Being Gentile is not a secondary status, some kind of concession from God. It is a unique calling which brings along full rights in the commonwealth of Israel (Eph. 2). Faith in Jesus is enough. Both Jews and Gentiles are called to see their backgrounds as a blessing to live out their faith in this world.