Once upon a time there was a pastor. (It wasn’t me. Honest.) This pastor had just stumbled upon an allegorical method of reading Old Testament stories and through it had made some wonderful discoveries. Now he was tempted to apply this method in every situation. And as this pastor was from a congregational culture where sermons were “led by the Spirit” (in other words, not prepared in advance), trouble ensued. 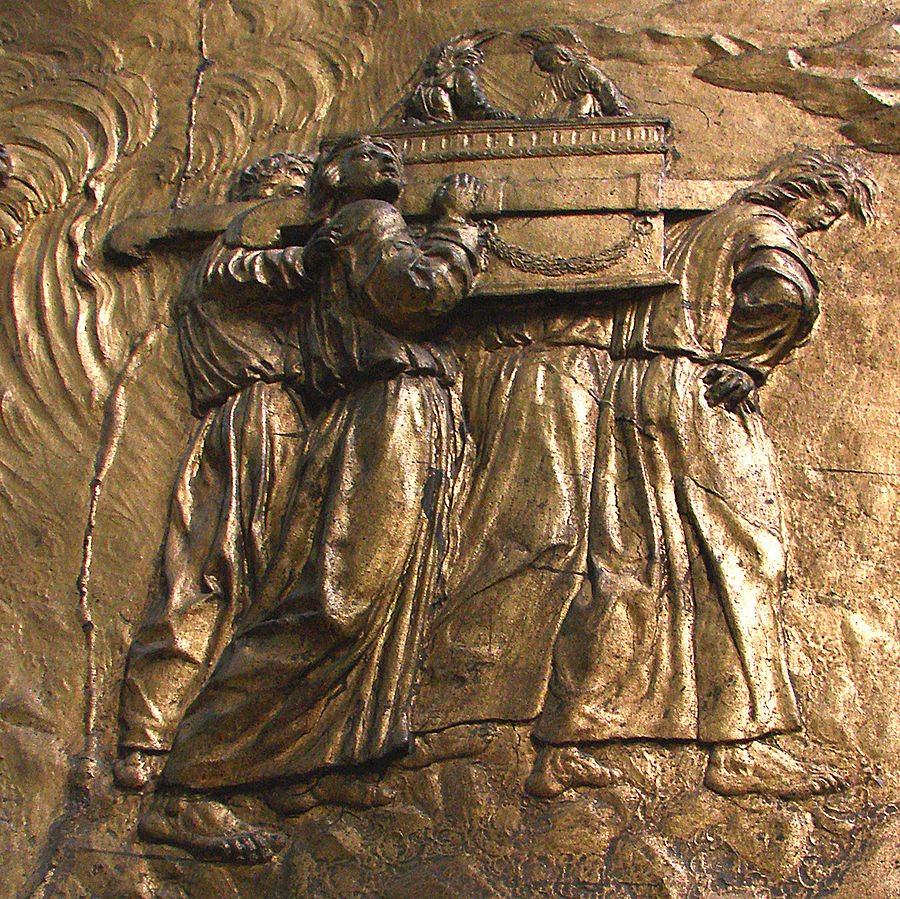 Picture of Auch Cathedral, France: the Ark of the Covenant, courtesy of Vassil

One bright Sunday morning, our enthusiastic pastor chose a text from I Samuel 6, where the ark of the covenant is returned from Philistia to Israel. The ark had been taken by the Philistines as spoils of war. After the Lord had rained various disasters upon them, the Philistines finally took the hint, and returned the ark to Israel. In the pastor’s sermon, the cart carrying the ark of the covenant became an allegory of the congregation carrying the Word of God. The cows pulling the cart were the believers, each of whom has a great calling to carry His word in this world. The encouraging allegory ended short when the pastor reached the point in the text where the cart was disassembled and the cows were sacrificed over the fire made from the wood of the cart.

One might conclude that advanced reading and preparation would have been in order.

In an interesting parallel, not only was the aforementioned sermon a good example of things going wrong… so was the entire story of the return of the ark of the covenant to Israel and ultimately, to Jerusalem. The background of the story is a military and religious catastrophe which resulted in the ark of the covenant being carried off by the Philistines – until they realized they were safer off without it, and returned it to Israel.

Here we come to the part of the story which has caused difficulties to more than one pastor. The part played by the Philistines was fulfilled when the ark of the covenant reached Bet Shemesh. There, the cart was broken up and used as wood to burn the sacrificed cows which had pulled the ark to the Israelite town. However, the point at which the unfortunate pastor completed his failed allegory was the point where things began to go wrong for the Israelites.

What happened next is determined by your choice of base text. The Masoretic Hebrew text and Greek Septuagint give slightly different accounts of the following events. According to the Hebrew text, some in Bet Shemesh looked upon the uncovered ark of the covenant and died because of that. Looking directly at the uncovered ark had been strictly forbidden even for those who were tasked with caring for it (Numbers 4). According to the Greek text, there was a particular family in Bet Shemesh who didn’t join in rejoicing over the return of the ark. Thus, their indifference towards the Lord resulted in them being struck down. (Another point of dispute between the texts is the number of casualties.) However, the end result remained the same: the ark of the covenant was not accorded the proper respect instructed by the Torah, and this resulted in immediate judgement. If God had been harsh to the Philistines, how much more to the Israelites who had received written instructions regarding the ark?

From there, the situation turned from bad to worse. Bet Shemesh was a Levite city. It was not by accident that the ark ended up there. The Levite inhabitants of Bet Shemesh would have included priests, descendants of Aaron, whose task it would have been to cover the ark of the covenant, and also the descendants of Kohath, son of Levi, who were instructed to care for the covered ark. These people should have had an in-depth knowledge of the proper handling of the ark of the Lord. Instead of doing their jobs, after the deaths of several inhabitants, they decided to send the ark to the neighbouring town of Kiryat Yearim. (This might actually hint at an ancient case of enmity between two neighbouring cities.) Regardless, Kiryat Yearim was not a Levite city, but a part of the area given to the tribe of Judah, which had not been tasked with caring for the ark. No one in the tribe of Judah should have had anything to do with the ark of the covenant. Nevertheless, there it was sent, and one of the inhabitants, Eleazar son of Abinadab, was consecrated to guard the ark. The lack of casualties in Kiryat Yearim (despite this clearly being against the Lord’s instructions) can only be because of God’s great mercy.

Can things get any worse? Of course they can! Incredibly, the ark of the covenant was promptly forgotten for at least one generation. More than twenty years passed… Samuel’s judgeship began and ended… Saul’s regime began and ended… and the ark remained in the house of Abinadab, where it was seemingly passed on from Eleazar to his sons. Only after the death of Saul, the ensuing civil war and David’s inauguration as king, did anyone recollect the existence of the ark. From 1 Samuel 6 until 2 Samuel 6, there is not even one mention of the ark of the covenant.

Was the location generally unknown? Possibly, but there’s no indication of that. On the contrary, when David makes the decision to recover the ark, its location does not appear to surprise anyone. Was the importance of the ark forgotten? This, too, is a possibility; although even that would be hard to comprehend. The ark of the covenant had been in Shiloh where Samuel grew up. Samuel was a Levite of the Kohathites (I Chronicles 6:27-28), who had been tasked with taking care of the objects in the sanctuary, including the ark of the covenant. Still, even Samuel himself was not recorded as having mentioned the ark – nor did he attempt to return it to its rightful place. All in all, we don’t know exactly what happened, nor do we know what caused this inexcusable ignorance – but somehow, somewhere, things went very, very wrong.

After a generation of ignorance, the ark of the covenant returned to center stage. David had established his rule and was in the process of moving his capitol to the old Jebusite city of Jerusalem. To centralize the regime, both the political and religious powers were concentrated in one spot: the city that God had chosen to be a dwelling place for His name (Deuteronomy 12:5). On the road to the new capitol, however, things went wrong again, and the body count grew even greater.

1 Chronicles 13 records a confession of past ignorance and an attempt to make things right. A great gathering of political, military and religious leaders heads to Kiryat Yearim to bring the ark of the covenant to Jerusalem. Honor is given to sons Uzzah and Ahio (or more likely, grandsons or even great-grandsons) of Abinadab to escort the ark in the final leg of the journey to the ark’s rightful place. However, one day turned into three months. How did this happen? The ark of the covenant was placed onto a cart pulled by oxen. The journey began with great rejoicing and celebration. At a certain point, the oxen stumbled; to prevent the ark’s falling to the ground, Uzzah reached out his hand to steady the ark. God struck him, and he died. This is considered to be one of the hardest parts of the bible: Why would God strike a man who wanted to protect the ark?

The reason is again found in the Torah. First of all, Uzzah and Ahio never should have been there. They were inhabitants of Kiryat Yearim, and as such, almost certainly members of the tribe of Judah. Secondly, the ark was not to be moved by cart, but only carried by a certain family of Levites, after it had been properly covered by the priests. To summarize: everything about this journey went against God’s instructions. Instead of questioning why Uzzah died, we should be wondering why he was the only one! Again, one can only conclude that God chose to have mercy.

It was only after the death of Uzzah that David came to comprehend the holiness of God. And it scared him. David realized that God doesn’t tolerate lax obedience – something he would continue to struggle with the rest of his life. This newly discovered fear of God prevented the king from continuing in his failed endeavor to bring the ark to Jerusalem any which way. It also prevented further casualties from being incurred, as David finally made the first correct decision in the ark debacle: he left the ark of the Covenant in the house of a man by the name of Obed-Edom.

Whether this decision was the correct one, or whether David actually accomplished the very difficult task of making a terrible situation even worse would depend upon the identity of this Obed-Edom. Obed-Edom was said to originate from Gath. Gath is commonly known as one of five key Philistine cities in the area. (And if Obed-Edom had been a Philistine, this would have been another tremendous error.) However, it is also possible – and indeed, most probable – that the name “Gath” referred to a city named, in part, “Gath”, e.g. Gath-Rimmon, a Levite city in north. In fact, “Obed-Edom” was named among the Le 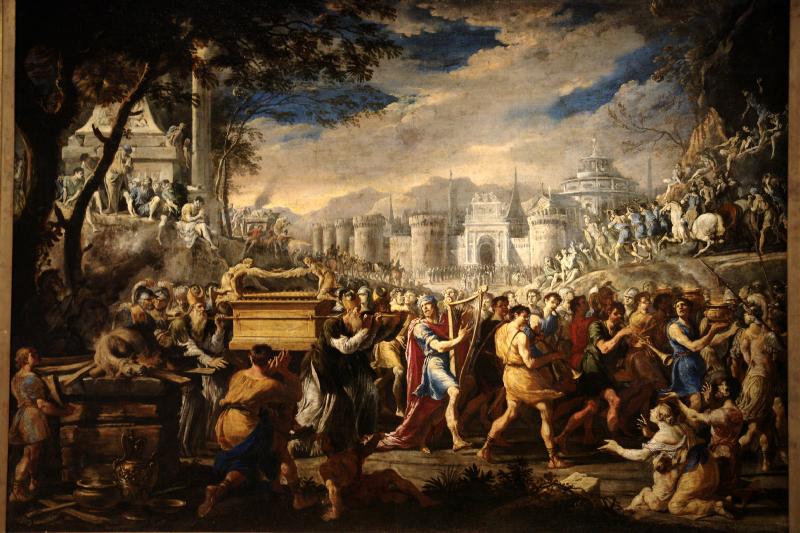 “David bearing the ark of testament into Jerusalem” painting by Domenico Gargiulo, courtesy of Wikimedia Commons

After three months of quiet, David revisited the idea of bringing the ark of the covenant to Jerusalem. This might have been the result of jealousy (or just a lack of ark-related disasters), as the idea was inspired by reports of Obed-Edom’s blessings. Whatever the case, it seems the instructions concerning the proper handling of the ark of the Lord had finally been remembered and put into practice (I Chronicles 15).

At long last, after so much trial and error, they finally got it right. The ark was carried by the appointed Levites who had consecrated themselves and dressed appropriately. They celebrated jubilantly: the ark of the Lord was finally on its way to its rightful place, physically and spiritually.

What are we to learn from this story? The long, convoluted journey of the ark is a warning to us not to neglect the word of God. Good intentions will never replace the actual reading of the bible and following our Lord according to his instructions. Without the bible, our faith may be genuine, but it will end up in disaster. In order to obey, we need to take God’s holiness seriously, while also being aware of our dependency on God’s great mercies and forgiveness when we – inevitably – fail.