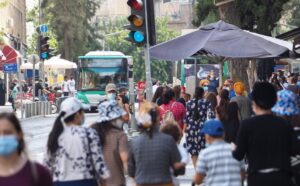 This year I am studying to be a licensed Israeli tour guide. The course is in English and therefore the backgrounds of the participants are very varied. Approximately one third of the group is observant religious Jews, and another third is Muslims. And the rest of us are a mixture of secular people and others, including believers in Jesus, Messianic Jews, and Christian Arabs. The course is very intensive; the 2-year program is packed into just 10 months. Which means, as a group we routinely spend long hours together.

During our last 5-hour lecture we had one luxurious 30-min break, instead of multiple short breaks. The reason for this longer break was the time of day: the Jewish evening prayer Minha had to be held, and the break also provided Muslim participants with adequate time to end their Ramadan fasting for that day. And after these religious rituals, we gathered together again to learn about 2nd Temple history.

Our group reflects the multicultural character of Israel. During course hours we are all in the same situation. We come from various ethnic backgrounds, cultures and countries, we have different thoughts and views of Israel, but we are all Israelis.

Israel is at the junction of three continents merging together influences from all points of the compass. The nation is knit together from people and cultures from around the globe, e.g. from the Jewish communities in different parts of the world. Some new immigrants who move to Israel under the Law of Return are not actually Jewish according to the Rabbinical Law. Messianic Jews are viewed by outsiders as falling between Judaism and Christianity. They see themselves as Jews while Orthodox Judaism considers them Christians due to their faith in Jesus.

Another major sector of the Israeli society is the Arabic-speaking population, both Muslim and Christian. Many of these people are native to the land, having lived here for generations; some emigrated from surrounding Arab countries just a few years or decades before the creation of the modern state of Israel.

There are also many dividing lines within the Hebrew and Arab-speaking communities. Within both groups are people from diverse backgrounds, with distinctive cultural and religious customs, compared to the others in the same ethnic group.

In addition to these main ethnic groups there are other minorities in this land: Arabic-speaking Druze, a people group also found in Syria and Lebanon; Arabic-speaking Bedouins who inhabit various areas in Israel, Jordan and Egypt; Armenians, who speak either Hebrew or Arabic, depending on where they live; Circassians, who are usually Sunni Muslims and serve in the Israeli army; and Samaritans, who consist of a tiny Hebrew-speaking community in Holon and a tiny Arabic-speaking community near Nablus. These minorities have their own schools with their own curriculums, they have their own local municipalities etc.

Co-existence of all these sub-groups is often challenging, but on the whole, it seems to work. There isn’t always that much interaction between these groups. Many prefer to keep their own communities and traditions and they basically live all their lives in their own cultural bubbles. You could even claim, that between the groups there are thick cultural glass walls that are almost impossible to penetrate.

It’s funny – when Israelis fly abroad, all the passengers from various backgrounds suddenly become unified and very “Israeli”, no matter whether they be religious, secular, Russian, Ethiopian, native Israelis or new immigrants. The picture of the people in Israel is like a mosaic: scattered pieces coming together to form one body.

While writing this article in May 2021, clashes erupted in Israel, in cities where different ethnicities had typically gotten along for decades. Unlike in previous conflicts, incidents of extreme violence took place in mixed Arab-Jewish neighborhoods. Cars and properties were burned and flames of hatred flared. Political tension has existed already for a long time, but such vicious acts among neighbors are new. Suddenly, bubbles and glass walls began to shatter. Many were afraid that the 3rd intifada would start. Fortunately, Israel and Hamas made a ceasefire after eleven days of fighting. However, tensions remain, and some rioting continued. 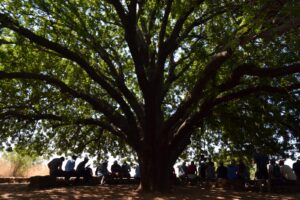 In the midst of frightening potential scenarios there is a phenomenon that brings a spark of hope: many Jews and Arabs joined together to promote peaceful coexistence. During this latest conflict, and following it, thousands of people gathered to demonstrate in favour of harmonious relations between Jews and Arabs. Some of them were leftists, calling for the two-state solution. Other grassroots movements drew participants from wider political and religious spectrums, for example Women Wage Peace. On Facebook, people resisted hatred and promoted peace by joining the group Jews & Arabs Refuse To Be Enemies.

Believers haven’t remained silent either. The national board of Messianic pastors and elders came out on May 17 with a statement lamenting the polarization and hatred: “We Israeli Jews and Arabs, who share the same faith in Jesus as Messiah and Lord, declare that we are united in brotherly love that is rooted in our faith and based on the Scriptures of the Old and the New Testament — Our hearts agonize at the expressions of violence and hatred in our country, where we all live together and we have no other country.” The statement goes on to call all believers to express unity in love, help each other and through all this, confront the forces of Satan raging around the country.

Obviously the conflict has two levels – the political level and the daily level. On the political level, this is a conflict that will unfortunately not be solved in a near future. On the practical level, most people in Israel want to return quickly to “normal” life – or at least to what is considered normal, here. Living in bubbles has been the way people from different cultural and religious backgrounds have successfully co-existed in peace for generations. This can be seen as a positive thing. We hope to see relative harmony prevail again, as we continue to dream of an end to the conflict and pray for the peace of Jerusalem.