Photo by Markus Winkler on Pixabay

I am fascinated by everything related to Jewish culture and religion. So fascinated, that, in the middle of my Bachelor of Hebrew Language and Literature studies, I left China to come study at the Hebrew University in Jerusalem, and pursue an internship at the Caspari Center. This afforded me an excellent opportunity to explore the diversity of religious life in Israeli society.

By virtue of the abundant library resources and help from people at Caspari, I was able to gain a deeper grasp of the Jewish Messianic movement with which I had previously been unfamiliar. For my internship, I chose to research the topic of Aliyah of Messianic Jews under the Law of Return, enacted in 1950. A heated debate over the definition of Jewishness took place, and the issue became more complicated when the Israeli government imposed restrictions on immigration rights in 1970, targeting Jews who converted to religions other than Judaism. Messianic Jews, who are at times marginalized by Israeli mainstream society, were one of the minority groups affected by this new regulation. As the religious identity of Messianic Jews is subject to differing understandings, their eligibility for Aliyah was called into question. In answer to this, a number of organizations rallied to provide legal and financial assistance to Jewish believers desirous of making Aliyah. Organizations such as Chosen People Ministries have risen to the occasion and now help Messianic Jews who find themselves needing to fight the Israeli system for their “right of return”.

Researching this topic caused me to think more deeply about true freedom of religion and the intricacies behind Jewish and Israeli history, politics and culture. I found myself walking down the streets of Jerusalem, noticing all these different people and the great diversity of visible religious observance. I felt compelled to further examine these issues.

China is the country with the world’s greatest irreligious population. For most people living in China, religion is an unfamiliar topic. It is also rare for someone to be deprived of the right to citizenship because of their religion. According to official statistics, roughly 13% of Chinese people are religious, belonging to faiths such as Buddhism, Taoism, Christianity, Islam, and more. There are at least 90 million Christians in China, spread throughout rural and urban regions. 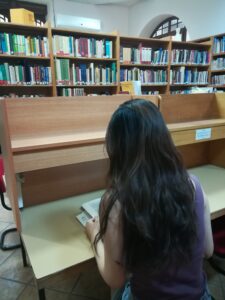 Before coming to Israel, I interviewed many Christians in my country. Many of them expressed a strong love for Israel and a desire to strengthen the relationship between the Chinese and the Jewish people. One group of Chinese Christians formed an NGO in China called Shalom Family. This organization has provided free accommodations and food to over 1,000 Israeli backpackers to date. There are also many churches in China which organize Israel tours for their congregants. Unfortunately, due to a lack of knowledge of Hebrew and of Israel, the majority of Chinese Christians who haven’t been to Israel have no idea about the religious life in Israeli society, or about the different sects of Judaism – ultra-Orthodox, Modern Orthodox, secular Jews, Messianic Jews, etc. – and their lives and customs. Typical stereotypes about Israel vary from the well-accepted view that Israel is a country surrounded by the flames of war to the notion that every Jew in Israel believes in God, and more.

I believe that, despite the cultural differences, the geographical distance and the language barrier, it would be extremely worthwhile for the Jewish people and the Chinese people to engage together. The two peoples could benefit greatly from communicating with one another and learning to better understand one another. I myself benefited tremendously from my time in Israel (and at the Caspari Center!), and I look forward to my return.