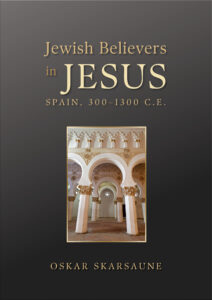 The first volume, entitled Jewish Believers in Jesus, covers the period from the beginning of belief in Jesus among the Jews until ca. 500 C.E.  The book was edited by Reidar Hvalvik and myself, with 14 other excellent contributors.

The second volume, covering Spain ca. 300–1300 C.E., is of a different nature. I am the sole author, and for various personal reasons (mainly diminished work capacity), I have decided to publish it not as a printed book, but as an Open Access PDF-file, free to download for every reader interested in its subject.

This second volume includes articles about:

Julian of Toledo, a son of Jewish believers in Jesus, who became head of the Spanish Church in its capital city (680–690). In his writings, Julian demonstrates amicable relationships with Jews and good knowledge of Jewish eschatology, especially the attempts to calculate the term of the Messiah’s coming.

Paulus Alvarus (Paul Albar), also a son of Jewish believers in Jesus, who ably defended the Messiahship of Jesus against a Christian convert to Judaism, Bodo/Eleazar (ca. 840). Paulus made a point of being truly an Israelite, both by (Jewish) birth and (true) Israelite faith (Christianity), claiming Eleazar failed miserably in being Jewish on both accounts.

Alvarus’ son, Hafs ibn Albar, (880s), who contributed to a decisive cultural turn for the Spanish Christians living under Muslim rule: He published his Christian writings in Arabic, thus leading on in a cultural “Arabization” of the Spanish Church during the Muslim period.

Petrus Alfonsi (Jewish name: Moses), who ca. 1110 published a fascinating Dialogue between his old Jewish self “Moses” and his new Christian self “Petrus.” Apart from a discussion about Jesus being the one who fulfilled the Biblical prophecies, he spends even more ink on proving the philosophical reasonability of Christian Trinitarian theology versus the unreasonable anthropomorphic theology of the Talmudic rabbis. He was also quite competent in the sciences of his time and mobilized this knowledge against the rabbis.

The Jewish rabbi and philosopher Abraham ibn Daud (ca. 1110–1180) and the Christian Archdeacon Dominicus Gundissalinus (ca. 1110–1190), who joined their different linguistic competences as a translation team transferring the Arabic text On the Soul of the Muslim Aristotelian philosopher Avicenna into perfect Latin. When the Latin text was published in Toledo, rabbi Abraham wrote the Preface, dedicating the book to the Archbishop of Toledo, John (1152–1166), and noting that for the first time the existence and nature of the human soul – which until now had been truths held by faith only – could now be demonstrated purely by reason. In Toledo, such Muslim/Jewish/Christian cooperation and exchange among the learned was begun in the twelfth century and continued into the thirteenth. It is well worth our acquaintance!

In the 1230s, the Jewish convert to Christianity, Nicholas Donin, alerted the Pope by pointing out that the most holy book of the Jews, the Talmud, contained horrendous blasphemies not only about Jesus and his Mother, but also about God himself and about the Church and Christians. This resulted in an inquisitorial process against the Talmud in Paris in 1240, during which the Jewish rabbis of France defended the Talmud, which nevertheless was condemned as sheer heresy, and in 1242 this was followed by burning Talmuds by the cartloads. A few years later, another Jewish convert (Jewish name Saul, Christian name Paul Christian) joined the Dominican Order, persuading his brethren in the Order that the Talmud contained rabbinic sayings about the Messiah that only Jesus could match. He therefore proposed a new missionary strategy to convert the Jews en masse: Show them that only Jesus fulfilled many of the Messianic sayings in their own authoritative books!

Both of these apparently contradictory approaches were followed up in Spain from the 1260s onwards. In this book, you can read a paraphrase and an analysis of the first and largest public disputation in the 1200s, the famous Disputation at Barcelona 1263 between the Dominican convert Paul Christian and the leading rabbi of the whole of Europe at that time, Moses ben Nahman (Nahmanides) of Gerona. The moderator at this debate was the King of Aragon, King James I. On one occasion, he broke the rules of a moderator and entered the debate himself! Nahmanides’ Hebrew report on the debate is rightly considered one of the high points in polemical works of this kind and is well worth an acquaintance.

The Dominicans could not accept that, through his report, Nahmanides had made Paul Christian look like an amateur in handling Talmudic texts. A Spanish monk in the Dominican order therefore took on the challenge of perfecting and refining the Dominican arguments based upon the rabbinic corpus of writings. His name was Ramon Martí. In 1267, Martí published a Latin work called Capistrum Iudaeorum, A Muzzle for the Jews in which he refuted point-by-point the arguments brought up by Nahmanides. In 1278, he followed this with an even greater volume, Pugio Fidei, The Dagger of Faith, in which all rabbinic and biblical texts were quoted in their original languages, with Martí’s own Latin translations. Modern Jewish talmudists are still impressed by Martí’s mastery of the entire corpus of rabbinic writings. In my volume, I render some typical examples of Martí’s learned arguments.

As a charming contrast to these great combats between the titans among scholars, we meet a Christian layman, the Genovese merchant Inghetto Contardo, who debated Jewish merchants from Catalonia in Spain. The dispute took place in the capital of Majorca in 1286 and resulted in the conversion of one of the Jewish participants. The Latin report on the event has only recently been properly edited, and no English translation is known to me. Accordingly, I have paraphrased it rather extensively, and I promise the reader a fascinating front-row experience in following this debate.

I conclude the volume with some rather critical reflections concerning what the Church can learn from its history with the Jews during its first 1270 years.

Oskar Skarsaune (born in 1946) is a professor of church history at MF Norwegian School of Theology in Oslo. Download his new publication here: Jewish Believers in Jesus: Spain, 300–1300 c.e.