My name is Sheila and I’ve been the Caspari Center bookkeeper for more than 18 years. While I enjoy the work, I enjoy the fellowship with the wonderful people I work with more.   I am originally from New York, where I grew up and completed my B.A. studies, intending to be a teacher.  When […] 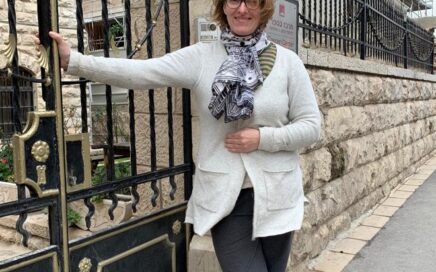 My name is Tanja Shoshani, and as of December 2020, I am the Caspari Center’s newest project coordinator.
I’m originally from central Finland, but I’ve been living in Israel with my Israeli husband, two daughters (18 year-old Manna and 17 year-old Miriam) and son (Ari, 6) since 2010. Manna will be finishing her matriculation exams this spring, and Miriam is studying in Finland.

Get to Know Our Staff

“Kabbalah and Christ: The Christian Use of Jewish Mysticism Since the Renaissance” Dr. William Varner “The “Nasara” in the Quran: A Jewish-Christian Window into the Middle Eastern Jesus-followers in the 7th and 21st Centuries” Judith Mendelsohn Rood, PhD, and Paul W. Rood “What Hath Maimonides Wrought?” Amy Downey “Review: Learning Messiah” Rich Robinson “Reaction to […]

Discovering Jesus in His Jewish Context 2021

Discovering Jesus in His Jewish Context 2021

Get to Know Our Staff

Margarita Kantor, Project Coordinator Who are you?  My name is Margarita Kantor. I’m originally from Russia, and I’ve been working at the Caspari Center for a little over a decade, as a project coordinator. Not long ago, while I was visiting Germany, I met a woman who happened to be the only Jewish believer in […]

I’m Jennifer and I’ve been the Caspari Center administrator since 2009. I’m often the first person visitors see when they come in the door. I manage the office, find solutions to problems (or let them resolve themselves!), edit most of our online publications, and take care of our website and social media. As in any […]

Get to know our staff!

I am Kirsi Pylkäs, 61 years old, from Kouvola, southeastern Finland. The distance from my hometown to the Russian border is 100 km, and the journey to St. Petersburg by car is 300 km. My father’s family is from East Karelia (present-day Russia), whose inhabitants fled to central Finland during the WWII war with the […]