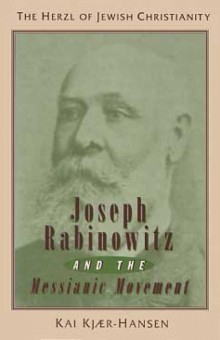 Joseph Rabinowitz and the Messianic Movement

Available in English, Russian or Hebrew.

Joseph Rabinowitz was the founder and prime moving force behind the Jesus-believing Jewish community “The Israelites of the New Covenant” in Kishinev which flourished in the mid-1800’s. Charismatic and visionary, Rabinowitz’ insistence that his acceptance of Jesus did not negate his Jewishness was a radical – and sometimes unpopular – position for his day. As with any pioneer, his name and character were slandered and abused by his detractors, sanctified and idealized by his supporters.

But who was the real Joseph Rabinowitz? Kai Kjær-Hansen’s book offers compelling evidence of the man’s true history, character, and motives. Carefully researched and meticulously documented, this promises to become the seminal work on Rabinowitz. A valuable resource for any serious scholar of Messianic Judaism.